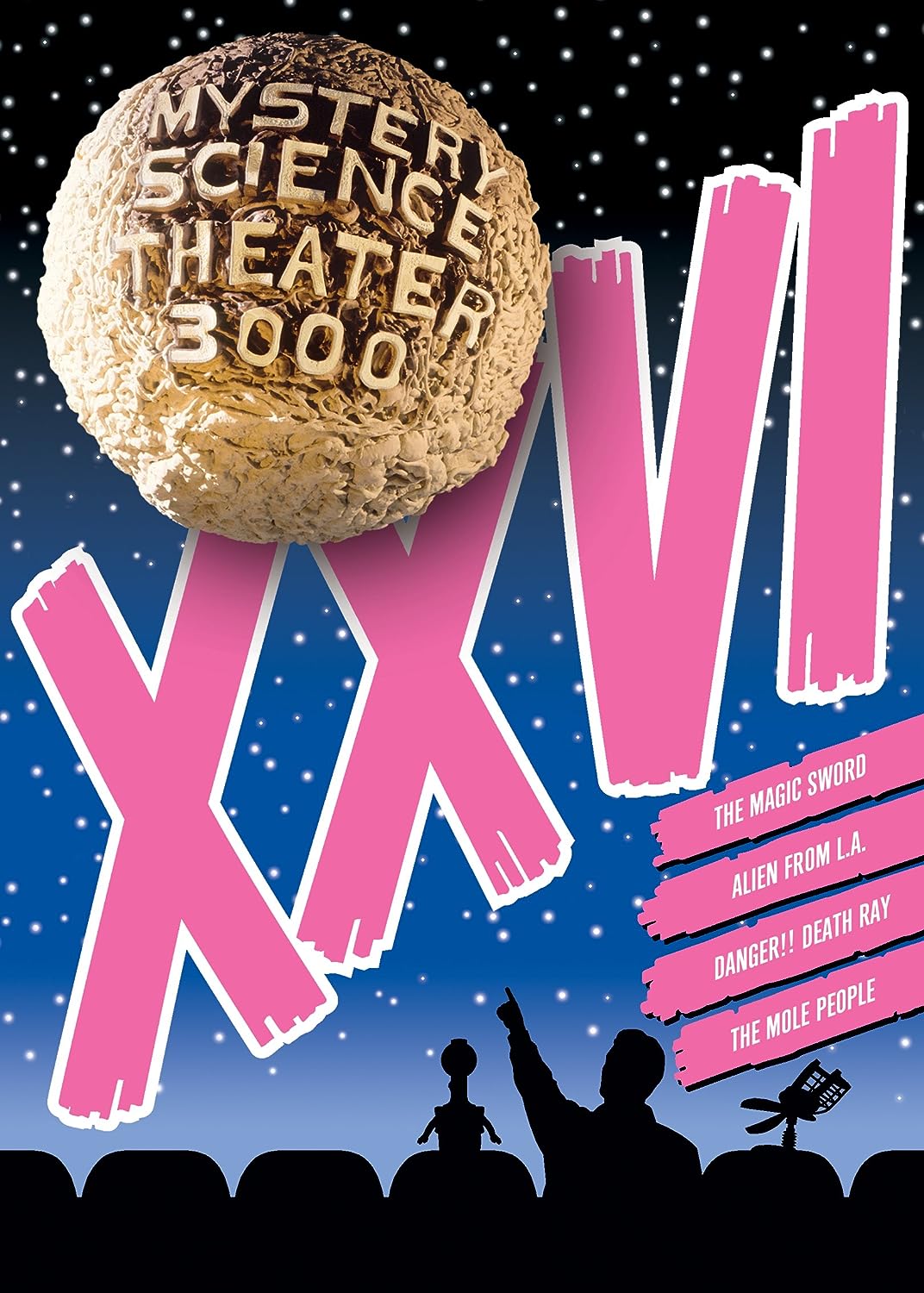 Magicians, mole people, super spies, and supermodels all get their just deserts courtesy of the crew of the Satellite of Love in Mystery Science Theater 3000: XXVI, which offers up a quartet of episodes from the Peabody Award-winning cult comedy series. As with previous Shout Factory releases, the four experiments included here, which make their home video debuts with this set, offer a cross-section of the program’s entire television run, from its fourth season on Comedy Central (The Magic Sword) to its eighth-season debut on The Sci-Fi Channel (The Mole People). Though ranking the four episodes is a moot point–like pizza and other simple delights, even the most lightweight MST3K entry offers more laughs than most current network shows–only The Magic Sword, which puts paid to Bert I. Gordon’s supremely silly fantasy, can be honestly called a bona fide classic, thanks in part to inspired riffing and a memorable host segment featuring Crow T. Robot’s impassioned love song to elderly star Estelle Winwood. Season five’s Alien from L.A., with a helium-voiced Kathy Ireland, runs a close second due to the dizzying scope of its references, which cover everything from Devo and Ted Nugent to Ray Stevens, wrestler Nick Bockwinkel, and the drag dance corps Les Ballets Trockadero. The Eurospy thriller Danger!! Death Ray, from season six, and The Mole People are amusing if unmemorable efforts that should please completists, but it’s Magic Sword and, to a lesser extent, Alien from L.A. that will remind longtime fans and show first-time viewers why Mystery Science Theater 3000 retains its status as one of television’s funniest and most imaginative shows. Shout Factory fills out the set with a handful of extras, some more substantive than others, but all with something to hold the viewer’s interest. Head writer Mike Nelson, who took over for series creator Joel Hodgson in the fifth season (and stars in three of the four episodes included here), is profiled in the newest installment of Life After MST3K. Nelson discusses his transition to host as well as his books of humorous film criticism and stint in RiffTrax, which takes an MST3K riffing approach to both mainstream and B films. Both Bert I. Gordon and The Mole People receive their own featurettes, though the former offers only a thumbnail of the prolific writer-producer-director’s prolific career. Of Mushrooms and Madmen: Making the Mole People is more substantive, exploring not only its production but studio demands to add a downbeat ending for its onscreen romance between human and underground dweller for fear of miscegenation charges! Alien from L.A. director Albert Pyun talks about the film’s unusual budgeting and the challenges of Ireland’s stratospheric voice (he also politely hedges on giving an opinion of the show’s treatment of his film), while clips of Nelson showing off respectable fencing skills while in Jack Perkins drag from The MST Hour round out the set. –Paul Gaita

Added to wishlistRemoved from wishlist 0
Add to compare
$11.97